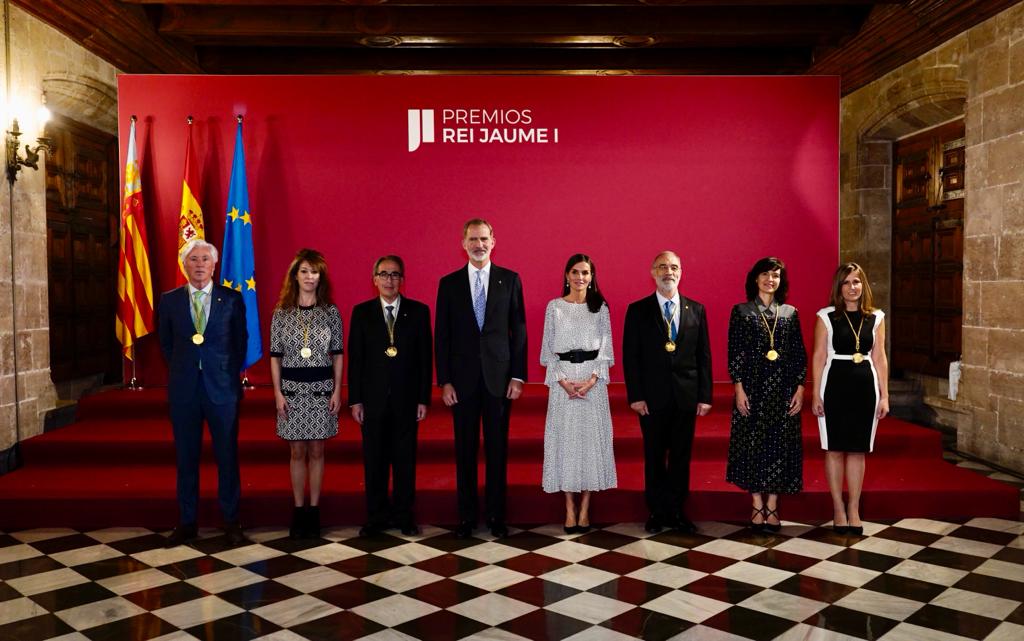 The King and Queen of Spain, Felipe VI and Letizia, presented the Rei Jaume I Awards at the Lonja de València. Before, a tribute to the figure of the scientist Santiago Grisolía, its founder, was held. The ceremony was also attended for the first time by two Nobel Prize winners, Finn E. Kydland and Roger Kornberg, jurors of the awards. The latter was in charge of dedicating a few words to the figure of the professor, emphasizing that “Santiago’s great success in the promotion of science in Spain was due in large part to his personal warmth and generosity of spirit, to his selflessness and firm commitment, to his wisdom and dignity. Santiago was a gentleman. Those of us who had the privilege of assisting him in the process of awarding the Rei Jaume I Awards will continue to do so in his memory. Santiago’s contributions to science and society in Spain and to the Awards are his legacy”.

Montserrat Calleja has been awarded with the Jaume I Prize in the category New Technologies, which has had an exceptional jury with six Nobel Prize winners.

BARISH, BARRY. 2017 Nobel Prize in Physics along with Rainer Weiss and Kip Thorne “for decisive contributions to the LIGO detector and the observation of gravitational waves”

FERINGA, BERNARD LUCAS. 2016 Nobel Prize in Chemistry, together with Sir J. Fraser Stoddart and Jean-Pierre Sauvage, “for the design and synthesis of molecular machines”

FRANK, JOACHIM. 2017 Nobel Prize in Chemistry, shared the in  with Jacques Dubochet and Richard Henderson “for single-particle cryo-electron microscopy (cryo-EM)”.

GLASHOW, SHELDON L. 1979 Nobel Prize in Physics jointly to Abdus Salam and Steven Weinberg “for their contributions to the theory of the unified weak and electromagnetic interaction between elementary particles, including, inter alia, the prediction of the weak neutral current”.

HERSHKO, AVRAM. 2004 Nobel Prize in Chemistry, jointly to Aaron Ciechanover  and Irwin Rose “for the discovery of ubiquitin-mediated protein degradation”.

ROBERTS, RICHARD. 1993 Nobel Prize in Physiology or Medicine with Phillip Allen Sharp “for the discovery of introns in eukaryotic DNA and the mechanism of gene-splicing”.